Five years in planning and due to be finished in early March, more than 23,000 solar panels will be floated on the Queen Elizabeth II reservoir near Heathrow and used to generate power for local water treatment plants 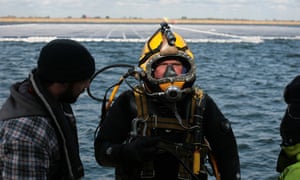 On a vast manmade lake on the outskirts of London, work is nearing completion on what will soon be Europe’s largest floating solar power farm – and will briefly be the world’s biggest.

But few are likely to see the 23,000 solar panels on the Queen Elizabeth II reservoir at Walton-on-Thames, which is invisible to all but Heathrow passengers and a few flats in neighbouring estates.

“This will be the biggest floating solar farm in the world for a time – others are under construction,” said Angus Berry, energy manager for Thames Water, which owns the site. “We are leading the way, but we hope that others will follow, in the UK and abroad.” 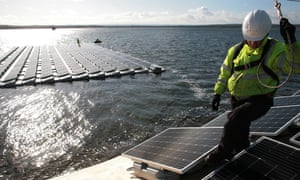 Five years in planning and due to be finished in early March, the £6m project will generate enough electricity to power the utility’s local water treatment plants for decades. The energy will help provide clean drinking water to a populace of close to 10 million people in greater London and the south-east of England, a huge and often unrecognised drain on electricity, rather than nearby homes.

Why put solar panels on water? The answer, according to Berry, is that the water is there, and might as well be used for this purpose. Floating panels, covering only about 6% of the reservoir, will have no impact on the ecosystem, he says.

Though waterbirds, including moorhens and gulls, live on the margins, and a thin scum of litter is visible at the shore, the reservoir is not intended as a home to wildlife, and any fish living here are accidental visitors. Eighteen metres deep, it provides water for Londoners in a constantly churning stream. Although most of the population growth in London tends to be towards the east, most of the water still comes from reservoirs to the west of the city.

But future projects to make use of water companies’ reservoirs in order to provide solar power might be in doubt, Berry said.

The current government has slashed subsidies for solar and wind power. Berry said that this would not affect the QEII project, but might have an effect on whether follow-up projects could go ahead. “We have had to look very closely at the economics of this, at all stages,” he said. “It is not clear what the future economics would be [for other potential projects].”

A similar floating solar farm with around half the capacity of the Thames Water project is being built by water company United Utilities on a reservoir near Manchester. Construction of an even bigger farm – at 13.7MW more than twice the QEII farm – is underway on a reservoir in land-scarce Japan and due to finish in 2018. 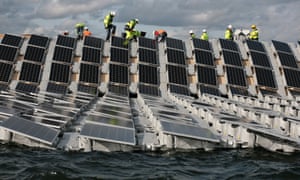 Putting solar panels on the water for the QEII scheme has not required planning permission, though big arrays of similar panels on land require official sanction. The government has decided to ban farmers who put solar arrays on agricultural land from receiving EU subsidies for the land.

More than 23,000 solar panels will be floated by developer Lightsource Renewable Energy at the reservoir near Walton-on-Thames, representing 6.3MW of capacity, or enough to generate the equivalent electricity consumption of about 1,800 homes.

The reservoir was commissioned in 1962, and remains one of the biggest serving London. Thames Water said that plans for a “super-sewer” under London would not affect the solar power project.